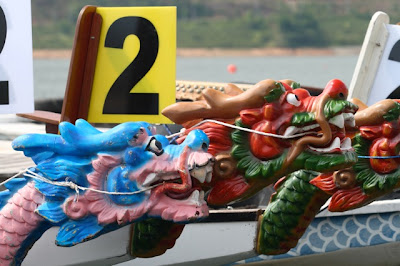 It was my first overseas race with Safra Dragonboat team and I must say, it was a fantastic one. The trip to Penang started on 22nd May morning. I had dragged myself out of bed at 5.30am so that I won't be late. Yup, the time to meet is 6.30am, it was kind of early for me but I still made it in time.
The bus left Toa Payoh stadium at 7am and from there, we headed off for Senai Airport. Traffic was okay for a Monday morning, but then, we were heading towards the Second Link and hence, maybe that was the reason for the smooth traffic. It took about an hour plus from TPY to get to Senai. The airport was under some renovation, but it still looked pretty much the same as the last time when I was there.
After we checked in, we had Mary Brown for Breakfast. I had the French toast set but it was not fantastic. The toasts were cold and the coffee weak. Luckily for me, Dunkin Donut saved the day. I had the peanut butter jelly which was superb! Yum yum.
After filling up our stomach, we were all ready to go. We were given face masks, an instruction from the management I think. And I think, we were the only group of passengers who wore the masks. Kind of fun though.
The flight was short, too short for me to truly enjoy it. It was great to be at Penang after the travelling in the morning. And our guide was on time, or she could have been there much much earlier. With our bags and stuff transported onto a lorry, we got onto a coach which has comfy seats and cooling aircon.
It took about 45 minutes before we reached our hotel. The journey was pretty rough and traffic was bad. Lots of cars on the roads and there were many winding roads. Hence I was glad when we reached Holiday Inn Penang.
We only had an hour to have lunch and to prepare for training. Time was tight and hence, we walked to a nearby coffee shop to "da bao". We were on time and so was the bus. The scenery of the training ground, Teluk Bahang Dam, was great. But then, some how I still prefer Bedok Reservoir to it. 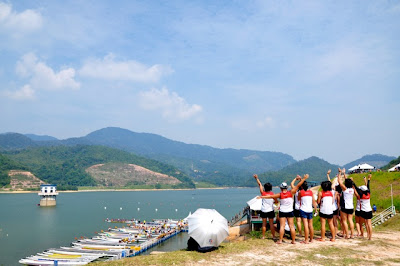 The water was heavy as it is freshwater. Unlike the saltwater in Kallang, the water did not provide much upthrust force and hence, it was more challenging to paddle in it. I was glad we had the training as it gave us a better idea of the conditions of the water. Longer pulls will definitely worked better than faster stroke rates + short pulls.
Training was short and shopping was next. YEAH!!! We headed for Northam Beach Cafe (诺登美食坊) for dinner and it was SHIOK! We ordered a lot of food, and it was really good. We had Fried oysters, German sausages, Char Kuay Tiao, Apom, Dim sum, Rojak, Po Piah, Prawn noodle and more... Although these are items we can find in Singapore but some how, they tasted much better. Either we were really hungry or the food was really good.
Then we headed for a shopping mall but as it was late, most shops were closed. The Giant supermarket was the only exciting choice we had. We stocked up water and tibits!! Chips, biscuits and more chips. Then, we returned to the hotel to rest.
Posted by Steven at 1:40 PM No comments: