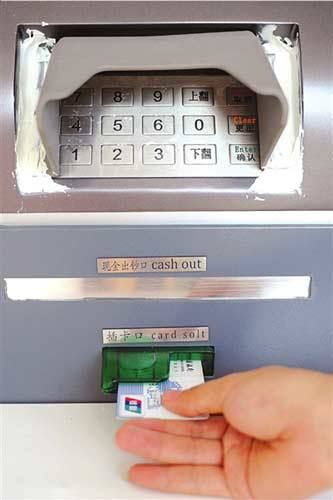 Oh my gosh... there is fake ATM in Beijing!!
Some of the PRCs are really "innovative" to come up with this idea.
佩服，佩服。
Posted by Steven at 11:27 AM 7 comments:

Attempting to do star jumps...

Posted by Steven at 3:57 PM No comments:

Now, it is not easy to say Hutong like the Beijingers. They say it with a 'r' at the end, so it sounds like Hutongr. I am pretty sure that people from other provinces or countries will not say it as well as a Beijinger.

Anyway, Hutongs are narrow streets within a neighbourhood. They are the corridors of Siheyuan , traditional courtyard residences. So imagine an area filled with Siheyuan and the streets between them are hutongs.

Some paintings on the walls of a hutong.

Email ThisBlogThis!Share to TwitterShare to FacebookShare to Pinterest
Labels: 胡同

Singapore has Orchard Road and Beijing has Wang Fu Jing

All countries have their own unique and famous shopping streets. Singapore has Orchard Road and Beijing has Wang Fu Jing Night Market (王府井). There are many shopping malls along this street; some have been here for decades and some were only built a few years back. This is the place you should visit if you are to visit Beijing as there is a fusion of new and old stuff - you can find high-end brands such as Gucci and LV or you can turn around at the corner ahead and see traditional Chinese masks and keychains.

The name of this street is derived from this well. Wang = King, Fu = Residence, Jing = well.

Inside this relatively new mall, I found a Uniqlo store!! Seems like Uniqlo can be found in most of the big cities. The large LED screen was showing a World Cup match and an area was furnished with chairs so that shoppers can sit down and enjoy the matches.

One can find a lot of old Chinese stuff here... I tried the 冰糖葫芦 but didn't like it - too sweet for me.

For those who are adventurous enough, you can try the fried scorpions or starfishes...

There is a church here, St Joseph's Church. From wikipedia: "A small church was first established in 1653 on the open grounds by the Jesuit Father Lodovico Buglio.[1] Later several earthquakes and wars gradually destroyed the church. It was rebuilt in 1904 as a Romanesque cathedral, with strong pilasters and one high and two low vaults displaying a grandiose architectural style. After the restoration in 1980, the church reopened. Because of its geographic location, the Church faces west."

The church as seen in the day. Some interesting statues along Wang Fu Jing.
Posted by Steven at 10:06 AM No comments:

Yup, there is a huge bird nest in Beijing.
Unless you have been staying in Mars for the past 2-3 years, you should know this 'bird nest' pretty well. The official name for this place is the Beijing National Stadium and 'Bird Nest' is the nickname given to it (as it really looks like one). It was used in 2008 for the Beijing Olympics.

The Bird Nest came into sight as our coach reached our destination.

The design is really unique and it really looks like a Bird Nest.

The weather was hot so this ice pop really came at the right time. Posted by Steven at 9:15 AM No comments:

The rainy weather made my pictures looked gloomy.

The South Korea's pavilion walls are decorated with the Korean words.

In short, the World Expo 2010 @ Shanghai is definitely worth a visit but do expect to see people and more people everywhere.
Posted by Steven at 9:05 AM No comments:

Some of the corporates' pavilions at Puxi

Posted by Steven at 1:52 PM No comments:

Some pictures from my trip to the World Expo 2010 @ Shanghai. There were long queues almost everywhere, waiting time for the Saudi Arabia Pavilion broke the record with 8 hours. This is crazy... Nevertheless, it was an interesting experience and I would recommend people to go and take a look. By the way, the pavilions over at the Puxi side are more interesting and more related to the theme, "Better City, Better Life".

The Singapore Pavilion looks better than the pictures; but still there are other more interesting pavilions in the park.

Our Asean neighbors are located near to the Singapore Pavilion.

Some performance going on at the Asia Square.

I kind of like the design of this pavilion, simple and nice.

Canada Pavilion looks good, too bad the queue was too long. As a matter of fact, almost all pavilions have long queues.

This pavilion has straw mats covered all over it; a lit cigarette will definitely set the place on fire.

The design of the Egypt Pavilion is quite cool too... look at the curves...

Because of the long queues, many visitors brought along their own stools/chairs.

Wow wow wow... things are getting interesting in Singapore. First there were the MRT jumps, the dead bodies found at Sentosa and Marina Sands IR, a teenager got his fingers chopped off by some Malaysians and now the CHC Saga is ballooning - bigger and bigger.

The public, including myself, has always been mindful of this organisation. Many years ago, I went to CHC once when it was still located at Paya Lebar. I remembered the people there were very friendly and warm to me. It felt like we were friends for a long long time... it felt good but at the same time, a little eerie... I couldn't help but thought to myself, "something is strange here". I went twice but that was it.
Then, CHC produced a pop singer, Sun Ho who is the wife of the CHC's pastor Kong Hee. Never really like her, partly because I couldn't relate to her songs and partly because she is from CHC. I am not sure if she is really popular or if her supporters are only from CHC. She tried her lucks to venture into Taiwan but I guess the result is so-so. Then, she went to the USA and produced a few singles; one of which is "China Wine". It sounds alright but her MV was not what people expect from a pastor's wife or rather, from a Christian.
With the investigation still going on, there have been a lot of voices from both sides - the general public and CHC's supporters. One side is cheering that the organisation is finally being looked into while the other side is showing their support for their leaders. There is no sign that the comments on forums, facebook and twitter are slowing down. The comments by CHC's supporters are getting scarier too.
Look at this guy's comment, "CHC is half as the strength of the SAF regulars combined. Some regulars will even join us. If we want to build an army, we can. We want to buy arms, we have the money given to us by God to buy. No weapon shall form against us. CHC will be victorious, no matter what."
"When he arrived, the king asked him, "Micaiah, shall we go to war against Ramoth Gilead, or shall I refrain?" "Attack and be victorious," he answered, "for they will be given into your hand." - 2 Chronicles 18:14
God will give us victory if we are willing to fight in the name of the LORD."
http://www.facebook.com/note.php?note_id=401892991219&comments
I doubt he will do what he said but we never know. Why are these people brainwashed till this stage? They must recognize that the government is not against Christianity but are checking on the church's management. They must calm down and think sensibly, can they? Religions don't teach people to kill or hurt one another; humans are the ones who look into it too much and made it complicated.
Honestly, CHC has been around for a long time, why now? I mean, why is the investigation been carried out now? Is somebody trying to score points? He has not achieve anything significant and if the election is going to be held this year, he has to show that he is the best man to lead Singapore. Or is he not? Fishy fishy fishy...
Posted by Steven at 9:09 AM 5 comments:

I got these sushi from a shop that opened one week ago. Looking at the crowd during the dinner hours, it sure is tempting. This packet of sushi cost me RMB$20 (SG$4) and I can say I am very satisfied with the taste and quality. Well, it turned out that 10 sushi are not enough for me, I need more!!

Posted by Steven at 9:09 AM No comments: